How To Get Rid of Japanese Beetles 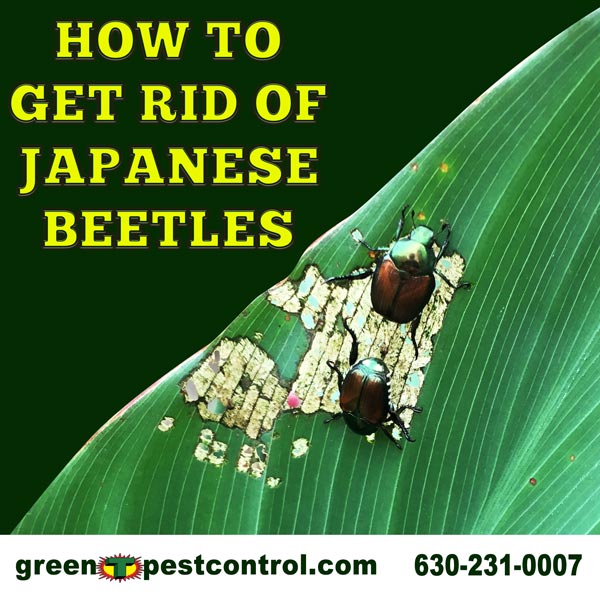 In this post, we talk about controlling Japanese Beetles in your garden. We discuss identification, life cycle, damages they cause and what to do about it.

Japanese Beetles are a common nuisance insect in the Chicagoland area and across the United States. These invasive pests from Japan arrived in the North America in the early 1900s and since that time has spread to almost the entire United States.

In Japan, they are less of a problem because they have many natural predators that help keep their population down. In the U.S. that is not the case and they are well known for their appetites for green leaves, roses, and garden plants. Japanese beetles are known to feed on over 200 species of plants. 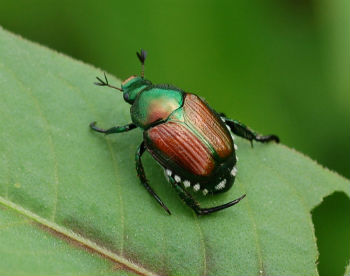 Commonly identified by its unique coloring, the Japanese beetle appears as an emerald dark green to black. The brown near the top of this insect gives its identity away. Noticeable grooves along the length of this area are also very distinct. It has small white tufts of hair that seem to project from its abdomen.

This species of beetle have a life span approximately around 30-45 days. The Japanese female beetle feeds, mates and lay one to five eggs, 2 to 4 inches deep in the soil, every 24-48 hours.

Prior to the insect’s export, it was known to occur only in Japan, where it’s not a major pest problem.

Entering the United States in 1916, the coppery-green beetles were hidden in a shipment of irises from Japan. Known to occur only in Japan prior to the insect’s export, and were not considered a major pest problem in its native habitat.

Well established populations happen most heavily east of the Rockies, and in the Midwest, and are still invading the United States. On the West Coast, small pockets have been identified. Conquering geographical barriers, they hitch rides on vehicles, freight, or even air cargo. Grubs and eggs can also travel in the soil of nursery stock.

Adult beetles with strong flying abilities enable them to infest areas several miles away from the soil they emerged from. More often than not, they only fly distances that are close between feeding and egg-laying areas. 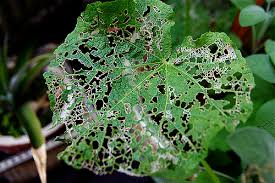 Certain plants are favorite targets of the Japanese Beetle, however, they do feast on over 200 plant species. Some of their favorite dinner options include roses, hibiscus, grapes, raspberries, linden, sassafras, Japanese maple and Norway maple. A few of the plants that they seldom damage include boxwood, red maple, flowering dogwoods, hollies, magnolias, and lilacs.

After the eggs hatch, Japanese beetles will be in a larval stage and live in the ground just below the root level of the grass. In this phase, they are a well-known yard pest known as “white grubs”. Before these destructive pests are even eating your plants in their adult beetle form, they are eating your grass roots and damaging the grass in your yard!

Grubs devour grass roots, making it impossible for the plant to absorb water and ultimately kills the grass. They are the nation’s No. 1 turf pest and cause irregular brown spots in your lawn from the feeding grubs. They also attract animals to your yard such as skunks, moles, and raccoons who feed on them and will dig up the soil in search of the grubs.

This destructive life cycle from birth to adult creates a constant chore gardeners to defend against.

If you want to get rid of Japanese beetles, you may need to use more than one method to be successful. You will want to control not just the ones eating your plants but also to attack the grubs that are living in the soil and will be giving you problems in the future.

You may have already tried hand-picking the beetles from off of your plants. You can remove them right off the leaves because they are slow and do not sting, and then drop them into a bucket of soapy water. Early morning is the best time because the beetles are less active. This method can help you ease the damage in the short term but will not be effective in the long run. 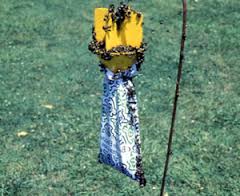 Another quick short term method of Japanese Beetle control is to use special Japanese Beetle traps. These will attract beetles in your yard into the trap where they won’t be able to escape. Don’t place the trap to close to where you are having problems because the scent of the bait in the trap can attract more beetles to your plants. Find a good location and leave the beetle trap their for a couple days and then remove it. Repeat this process every week or two.

Then next method you’ll want to try is to spray your affected plants with a product such as Japanese Beetle Killer (pyrethrin) or Neem, at the first sign of attack. Using a pyrethrin-based insecticide will be the safest and most effective way to combat them. This should help you control the Japanese beetles feeding on your vegetables, roses, flowers, and shrubs. Neem Oil is a natural antifeedant derived from a tree that when sprayed on plants, reduces feeding. 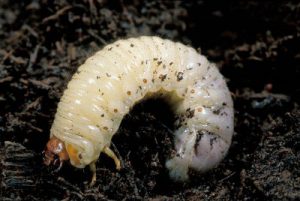 Finally, you will need to attack the beetles in their larval form in the ground. If you don’t, you can be sure a new generation of beetles will replace the ones you’ve already removed. This will also help protect your grass from being eaten and destroyed by them.

A product called Grub Guard will eliminate grubs. When applied in the Spring, it will diminish them before the beetles emerge. Milky Spore is another product that kills grubs. After a year or so, the chemical will keep working for 10 years or more.

Using a combination of methods gives you the best opportunity of controlling the Japanese Beetles and you should start to see fewer of them over time.

We hope this helps save your plants!

Do you want a professional pest control expert to get rid of Japanese Beetles for you?